Just forewarning you, this is quite a lengthy post.

Hey guys!  If you've been following me (or if you read some of my older posts), you'll know that recently I made a trip to New York City and during that trip, I was sooo excited to go to the Inglot store there, as there are only a few of their stores in the United States.  But at the store, I received less than good service.  It really frustrated me to the point of not wanting to buy products from them.

Since then, I have seen Amalia (Dear Makeup Diary) use these shadows and LOVE them.  I also have seen QueenofBlendingMUA and Gossmakeupartist on YouTube use them and rave about them as well.  Now, I am not one to hold grudges (sometimes I actually wish I was a little better at staying mad) but I was really peeved about my bad experience. But then I'd look at the swatches for these shadows and want them.  So I was having a bit of a dilemma.  The shadows are reasonably priced and have an excellent reputation but I was mad.  So after asking Amalia her opinion (I trust her opinion because I know she's used high end and low end shadows) and talking to my husband, I decided that it was probably smart business wise (as I plan on becoming a freelance makeup artist and Amalia said that Inglot was going to raise their prices soon) for me to get some of these shadows.

Their website for the Freedom program is COMPLETELY bananas.  It's very hard to keep track of what you're ordering and how many eyeshadows you have picked out.  Also the shadows are numbered and don't have names so it's even more complicated to remember which ones you like.  I even sat down with a list of shadows I had seen swatched and liked and gave up on trying to find them all, I just ordered ones I came across that looked nice.  I ordered primarily matte shadows, some pearl ones, and a few AMC (I don't know what that means) ones.

I submitted my order at about 1:00 a.m. on Tuesday.  Within minutes, I had an e-mail confirming my order.  Now I was planning (after reading makeupbydanisaddiction) for it to maybe take like a week for me to get my order.  So when I received an e-mail on Tuesday afternoon telling me that my order had shipped, I was amazed.  My order arrived at my house today around noon.  So it took 2 days for my order to be placed, shipped, and to get to me.  That's craziness.  I have never in my life received an order for ANYTHING so quickly.

So, on to the pictures!

I was so over putting the finish on everything, so for the swatches, I just put the number and left off whether they were matte or pearl or what have you (and yes, there are two 428's) 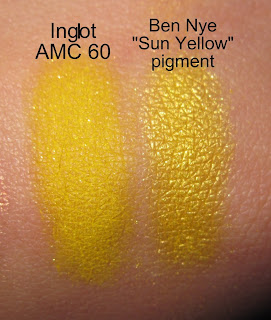 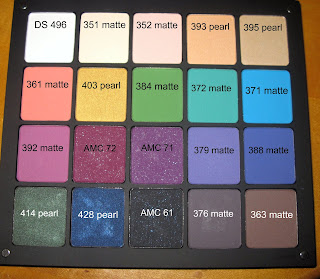 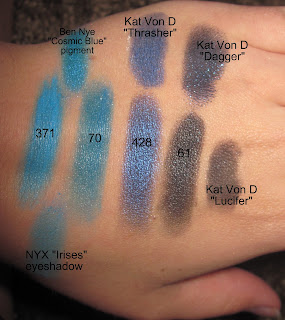 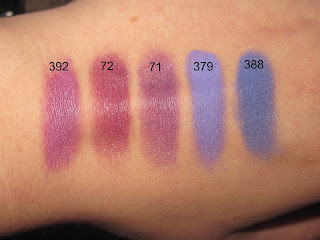 And now here's the look I did using this shadows.  Haha I wanted to use as many as I could in one look so I did a rainbow. 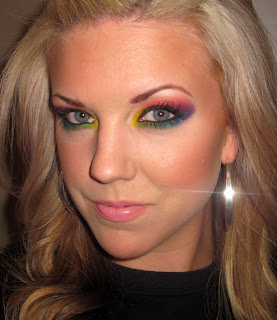 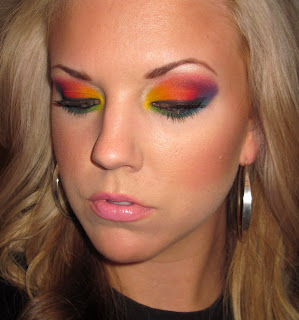 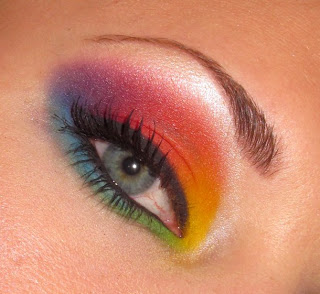 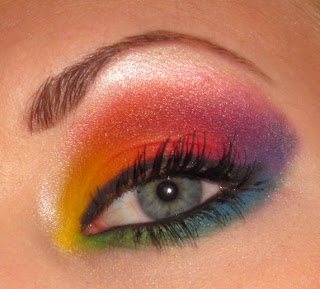 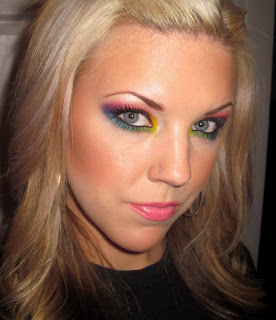 These colors are like redonkulously pigmented.  They're really quite amazing.  The only shadow that I had a hard time with was the yellow (AMC 60).  The ones called AMC's have glitter (small glitter) in them and I had some glitter in my lashes from it falling down.  But their matte shadows are soooo amazing!  They're like buttah!!  If you're going to order from them, order every matte shadow they make.  Even if I normally wouldn't like the color, I do just because they look so nice and creamy.  I have to say that the fast delivery and amazing product more than make up for the bad experience I had in the store.
But, Sonja, what about that extra 5 pan palette?  And you said you bought 33 shadows and I only see 28?
Haha I guess you'll have to wait and see!!!
Posted by Starryskies214 at 9:51 PM