Happy New Year! A fun look and a personal update

I figure I'll start this post off with the look in case you're not interested in the personal stuff.  I actually did this look like a month ago and just never got around to posting it.  I did post these pictures already on facebook so I'm sorry if you've seen them already.  I wanted to do a cut crease look with glitter because I hadn't used glitter in like a million years.  So here's the look 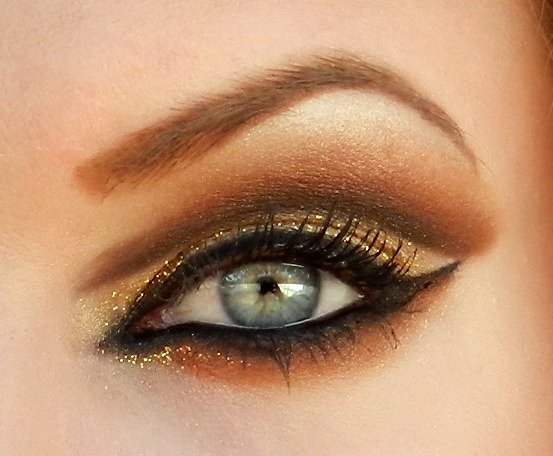 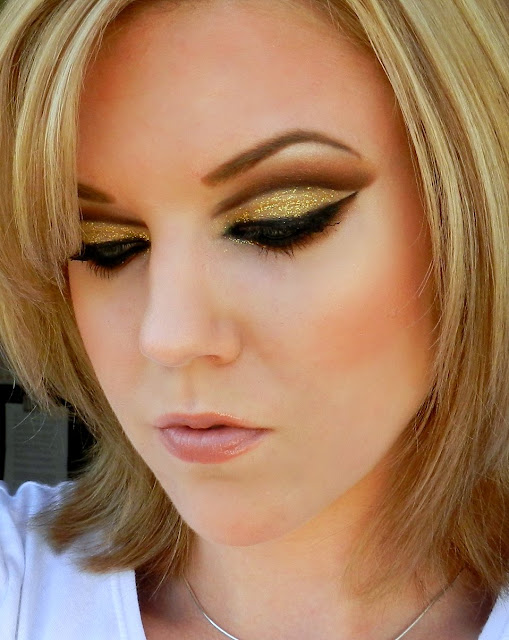 I thought it was a fun look, it was really dramatic and I hadn't done anything so dramatic in quite a while so it was a bit of an overload haha.

So now onto the personal stuff.
I am officially done with chemo IV treatments!!!  The more days that go by of me being done, the more excited I get.  Because I was going every 2 weeks for treatment so when I'd start feeling good again, it was almost time for my next treatment.  But now I'm starting to feel good again and I don't have to dread going for my next treatment because I don't have any more!!  I did find out that my oncologist wants me to take a chemo pill for 6 months though.  The chemo pill is not supposed to be as intense as the IV treatments but there are still a bunch of side effects that could make me feel like poo.  I also could still lose my hair.

If you follow me on facebook, you may have seen that I posted this picture of myself at my final chemo treatment 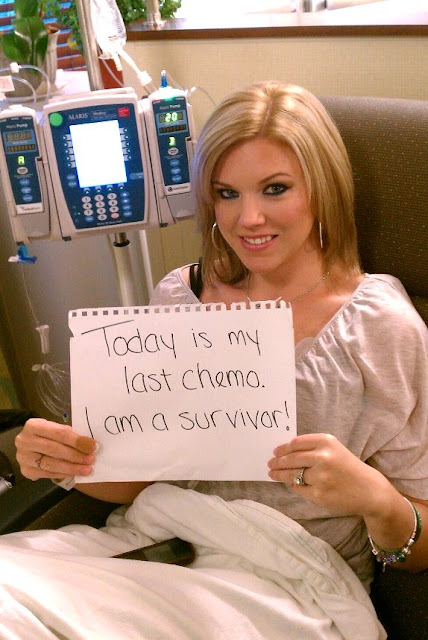 I posted that on my blog page mainly to let you guys know what was going on because I've been a terrible blogger and haven't updated my blog in a very long time.  I also didn't want to keep changing information on you because my treatments kept getting pushed back.  I didn't want to tell you I'd be done for Thanksgiving and then come back a week later with a "just kidding!"  But anyways, somehow this picture got shared out of control.  As of now it has over 255,000 likes and 3,471 comments.  Completely out of control.  I didn't even know that could happen.  I wasn't trying to let random people know I'm done with chemo, I was trying to let you guys know.

What I learned from this picture being shared so much and with so many comments is that there are some really really incredible people out there who really just want the best for someone they don't even know.  I got so many comments saying, "God bless you" and "Congratulations" and amazing comments like that.  I also learned that people can be incredibly cruel.  While the good comments far outweighed the bad, I got sooo many comments telling me that I should be ashamed of myself for posting this picture because it's fake. There's no way I went through chemo because I still have my hair.  I look "too healthy" to have gone through chemo.  I have makeup on so the picture is fake.  I have jewelry on so the picture is fake.  I had people calling me names.  Some people said the only reason anyone cares is because I'm a, "pretty white girl."  Which is complete nonsense!

My integrity was being called into question, it really hurt my feelings, and I really felt like I wanted to defend myself to every mean comment I saw.  I realize that I don't have to.  But who in the world would make up that they have cancer?  Why would I go to a hospital and be like, "can I sit in your chair and take this picture with my fake sign please?  Oh yeah, can I have a blanket and hospital bracelet too while we're at it?"  It makes no sense.  And I feel like if people educated themselves a little bit they would realize that not all chemotherapy drugs are the same.  They don't all make you lose your hair.  I responded well to chemo.  I'm very lucky and I realize that.

But people were saying, "nobody looks that good at chemo."  Well you know what?  I was feeling good the morning of chemo so I got up, showered, did my hair and makeup because that's what I do.  I don't go in public without at least some makeup.  I'm sure as heck not going to let my husband take my picture if I don't have makeup on, let alone post it on facebook.  If I had my husband take my picture the next day, you would see a completely different girl.  I would look tired.  I wouldn't have makeup on.  My hair wouldn't be done because that's what chemo does to people.  I have enough time in between my treatments where I get back to feeling like myself again so the mornings of my chemo treatments I feel fine.  It's the next 5-6 days where I feel like crap.

I just needed to get that out haha.  Thank you for listening to my little rant haha.  I appreciate every kind comment so much.  I couldn't understand why these people who have never heard of me or seen any of my makeup before this would care so much and their kindness blew me away.

I feel so lucky and blessed that I get to start 2013 being cancer free with no IV treatments left!  I feel blessed that I get to see 2013 at all because things could have been very different.  I'm going to ask you, as a personal favor, if you ever see a picture floating around facebook and you might think it's fake, please don't make nasty comments because you never know what someone is actually going through.

Thank you all for being the best followers ever!!
Posted by Starryskies214 at 9:42 AM 63 comments: