Inspired by the Dragon from "Enchanted"

I know I can't be the only one who gets sucked into Disney movies even when there are no children around.  This happened to me the other day.  The movie "Enchanted" was on and I just got sucked in and watched it even though my daughter was at school haha.  But I was excited in the scene where the evil queen becomes a dragon because of the gorgeous colors they chose to make the dragon!  I was inspired!

Here's a picture of the dragon! 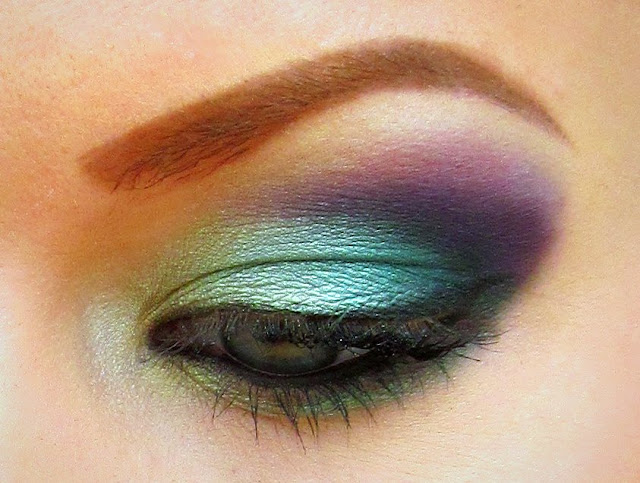 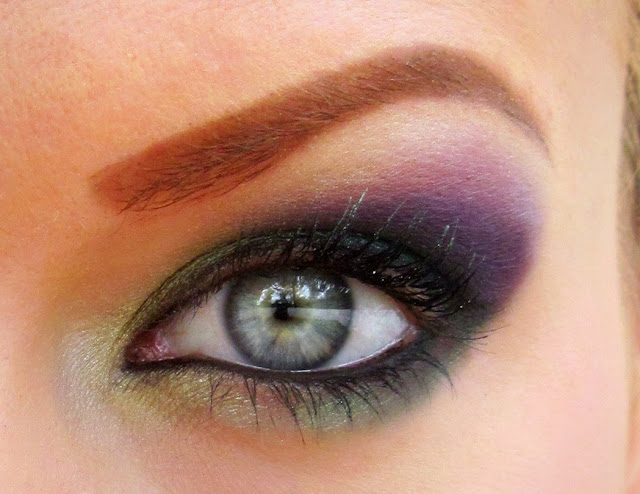 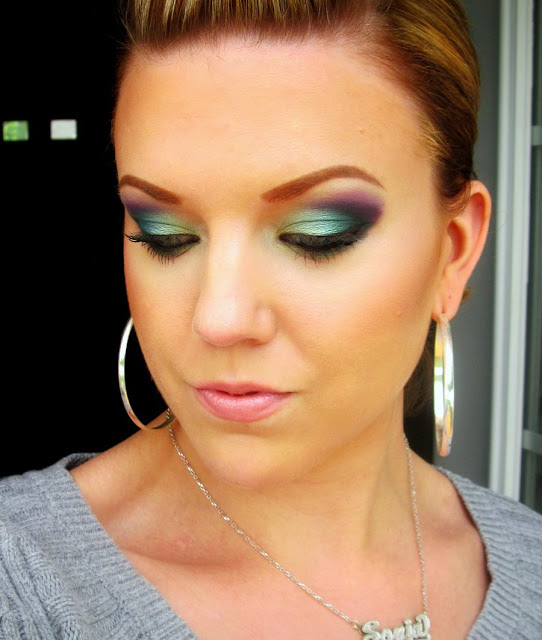 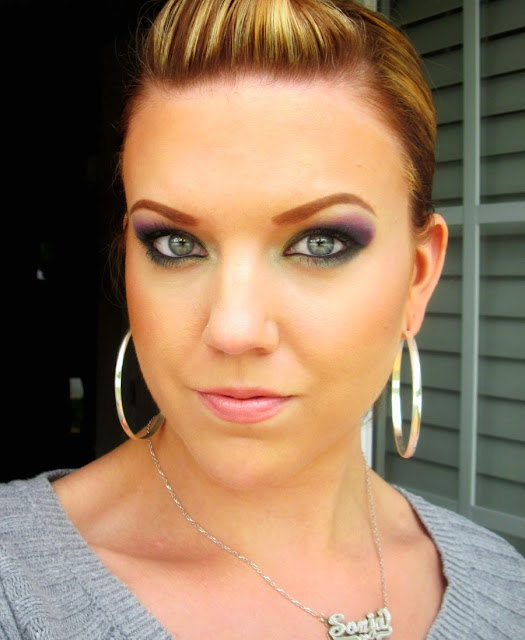 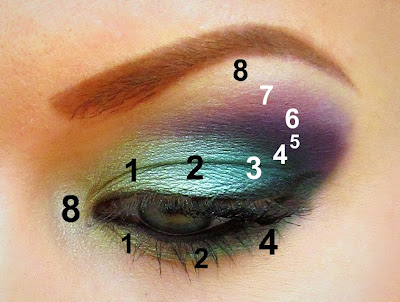 
It felt good to be inspired and do a look with lots of colors!

Also I have good news!  Meredith Jessica from Pigments and Palettes is awesome a decided to feature me as her blogger of the month for April.  She does a really fun (but tough!) interview so CLICK HERE if you want to check that out!

And a quick personal update, I go in for my 4th round of chemo on Monday.  I'm not looking forward to it, especially since I'm feeling good right now and I know it'll make me feel like poo.  I mean, I know I have to do it but I really dread going.  I was debating on doing a "Come to Chemo" with me post but I'm not sure if you guys would be interested in seeing that or if I'd be allowed to take pictures in the office where they do the chemo.  Let me know what you think about that idea.

But other than that I feel almost back to normal, my tummy is still sore from surgery but I can deal as long as I don't feel like I'm gonna puke haha.  My skin is getting better so I've been feeling a little better and actually wanting to do makeup, which makes me happy.

I haven't been on here in forever, I know and I'm sorry.  The chemo I've been going through has decided to make my face break out so badly, worse than when I was a teenager even, and I've just been in a slump.

Through this blog I have been able to get to know some amazing people.  I'm so grateful for people who e-mail me, even if I don't respond.  I'm sorry if I don't respond but especially on my chemo weeks, sometimes I'll glance at my e-mail on my phone but I just don't respond.  Please still know that your e-mails and comments mean so much to me.

One such girl is a blogger, whom I follow (though I've really been slacking on following blogs too), Amber, from Lipgloss and Flipflops was so so sweet and contacted me and asked if it would be ok if she sent me something to lift my spirits a bit as she lost someone close to her from cancer.  So she sent me this super sweet card and said that she was sending me some stuff from her favorite indie brand, Pretty Addictions, which is a mineral makeup line.

So here's the look I did using some products from what Amber sent me! 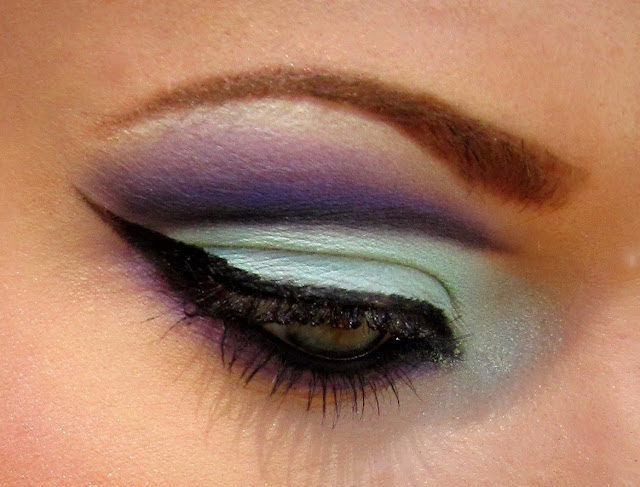 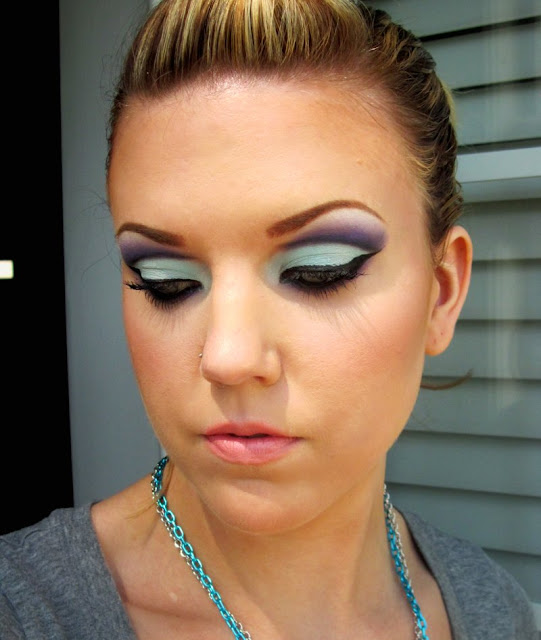 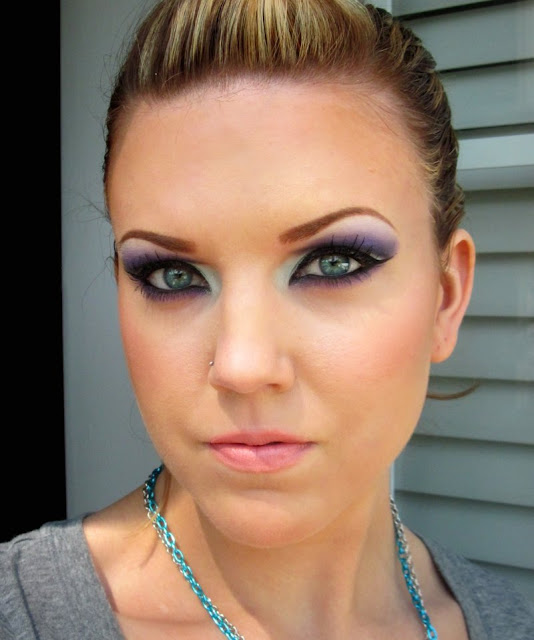 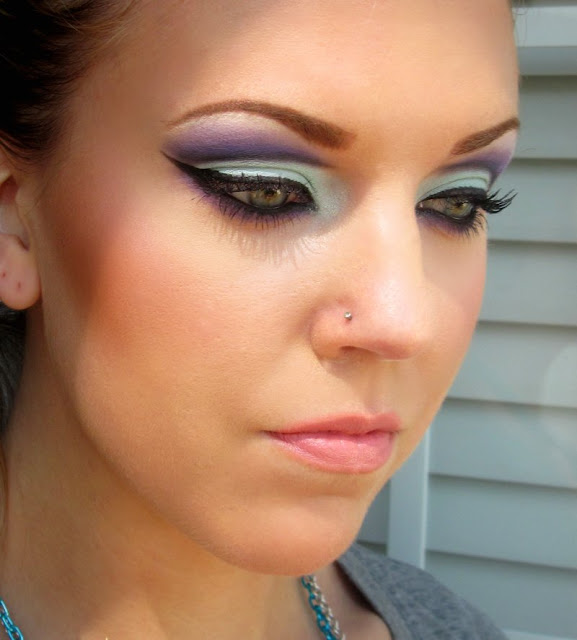 What I used:
TFSI
NYX JEP "Milk"
P.A. "Honesty" (Aqua)
P.A. "Passionate" (Purple)
Makeup Geek "Corrupt" (black)
Makeup Geek "White Lies" (white highlight)
MAC Blacktrack fluidline
L'oreal Voluminous Carbon Black mascara
And here's how the colors (from what was called the "Birthday Collection" which was limited edition and isn't available any more, and also a blush and a cheek highlight) came packaged and swatches of all of the shadows that came in the cute little bucket! 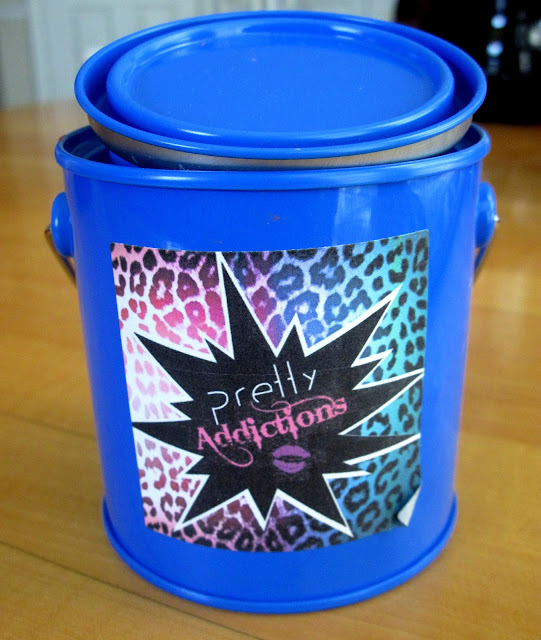 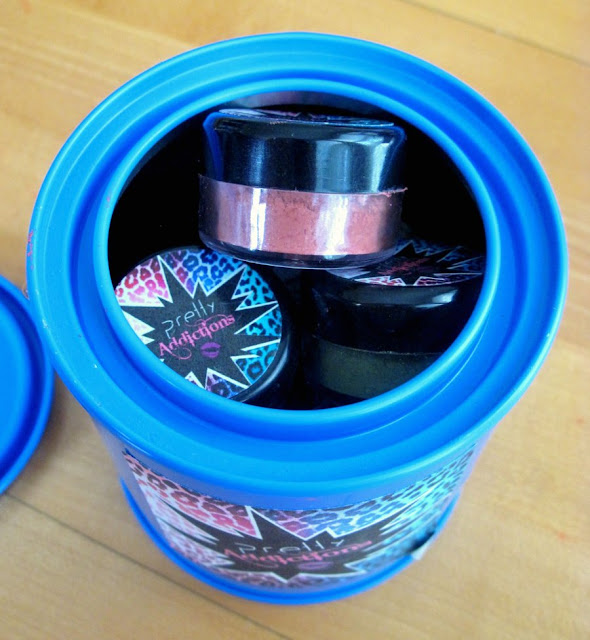 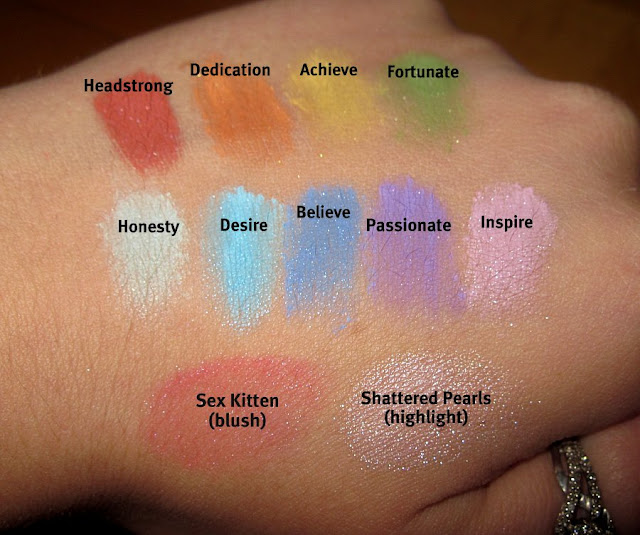 Cute little bucket, right?
Thank you, Amber, for sending me these eyeshadows, I can't wait to play with them some more and really get to use them.  And thank you all again for hanging in there with me while I have such huge gaps in between my postings.  I hope you like this look!  Thank you guys so much for all of your encouraging words!!
Posted by Starryskies214 at 5:00 PM 23 comments:

I don't know what it is about lime green and bright blue together but I just love them.  Makeup Geek's weekly challenge this week is to do a spring inspired look so this is the look I did for that.  They made a new rule when you enter pictures that the pictures can't be edited, which I think is good because I really think it makes it a more fair challenge (these pictures are slightly edited though, I just enhanced the contrast and edited my skin just a little in all but the first one which came out like that on my camera). 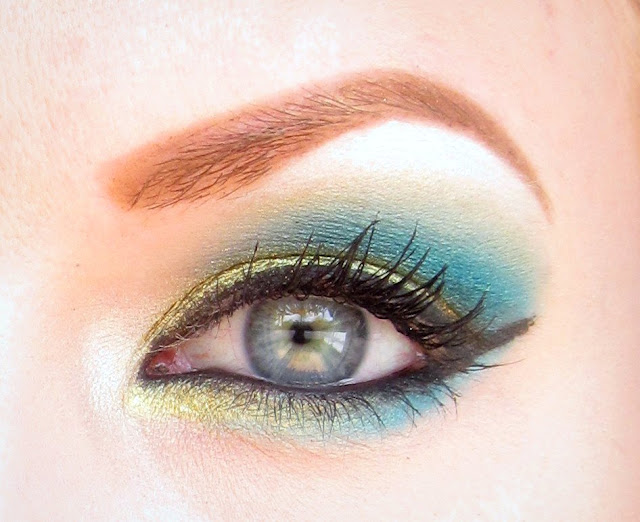 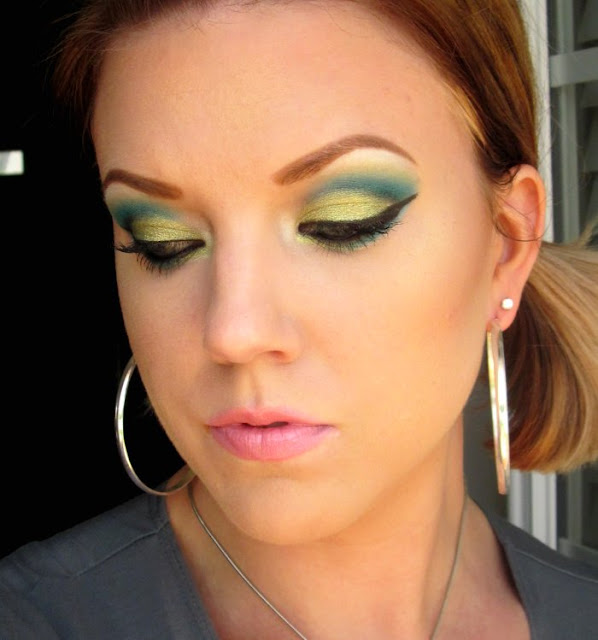 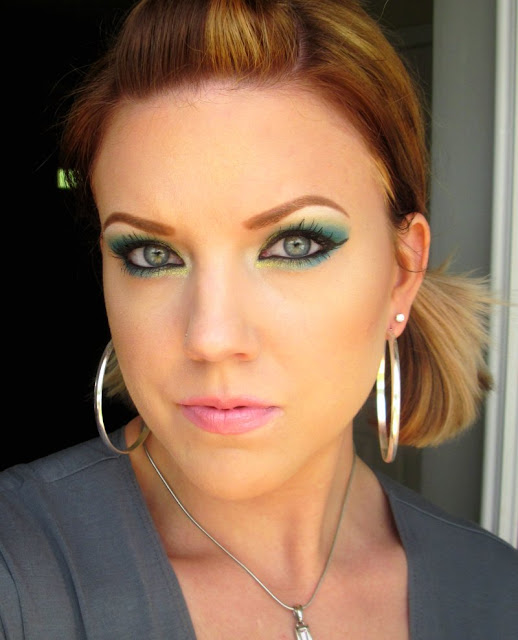 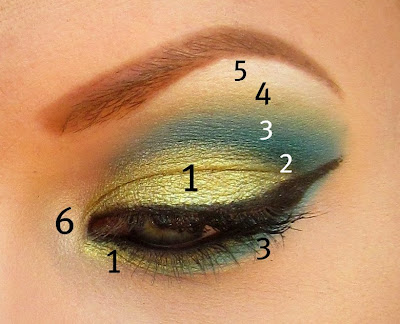 Here's a bonus picture of me and my handsome Sullivan! 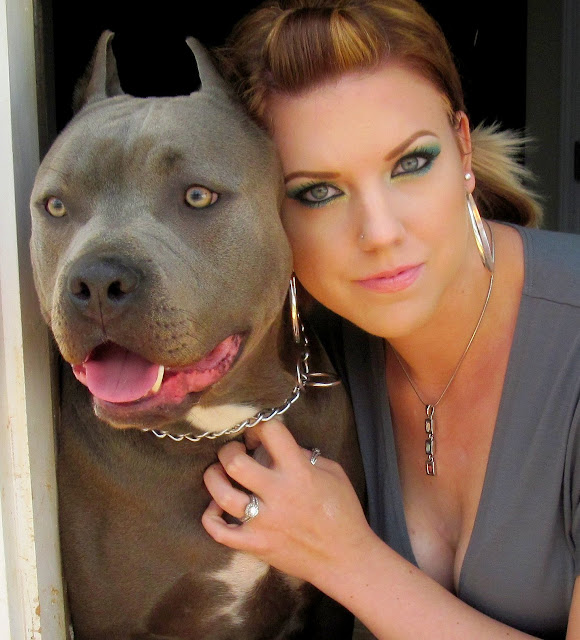 Isn't he so handsome? Haha can you see the makeup on the back of my hand?  Whoops!

I really liked this look!  It was fun and colorful, especially with the pink lips!

So I got through my second round of chemo.  I found out that blurry vision is a very uncommon side effect of the nausea medicine, it happens in less than 1% of people so they're going to switch my medicine to a different, longer lasting medicine.  My nurse said worst case scenario is that my vision is blurry for longer but hopefully it won't be at all.  I haven't had much of an appetite, on my chemo weeks I primarily eat saltine crackers and randomly some bread.  Luckily I have a week on and then a week off so I can eat on my non chemo weeks.

Also, if you are ever diagnosed with a disease I highly recommend that you DO NOT google the survival rate.  I did and it bummed me out.  I realize that the average age of someone diagnosed with colon cancer is 72 so I really think that's why the survival rate is so low (it's based on a 5 year survival rate).  I watched the movie 50/50 and he had searched his survival rate and so I thought I would too haha.  Mine is not nearly that high.  It just makes me realize that I really need to be, and will be, part of the small percentage who makes it.

I meet with my surgeon tomorrow just for another checkup.  I have all these questions about the surgery I'll need on my liver, which I'm super scared of.  They said it's a more intensive surgery than the one I already went through, which I thought was pretty tough (though not as painful as ACL surgery, I never woke up crying from pain after my "left hemicolectomy" like I did with my ACL/meniscus surgery).  I guess it's a tough surgery because of all of the blood vessels and everything in the liver.  I just hope I'm not in the hospital quite  as long after that as I was with the last one, I was really missing my daughter after the 3rd day even though she did come to visit me.

Sorry to keep talking, I've just been thinking all of these things and it's kind of nice to get the thoughts out.  So thanks for listening to me ramble haha!  And thanks so much for hanging in there with me!  Your support means so much to me!  Thanks so much guys!!
Posted by Starryskies214 at 2:31 PM 26 comments: