So in my thinking about what to do for Halloween, I finally decided to do a Drag Queen look.  I just think drag makeup is so much fun with all of the glitter and bright colors and just how dramatic it is.  I've only tried to cover my eyebrows one other time and it didn't work out that well because the glue stick I had was junk.  So I made sure to get some Elmer's glue this time!  So here's my final look! 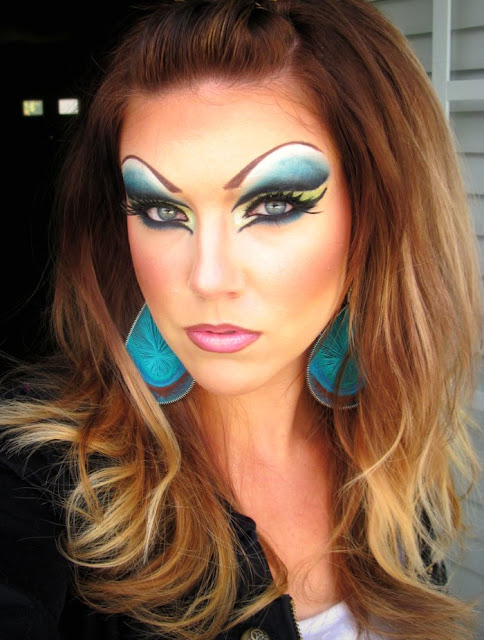 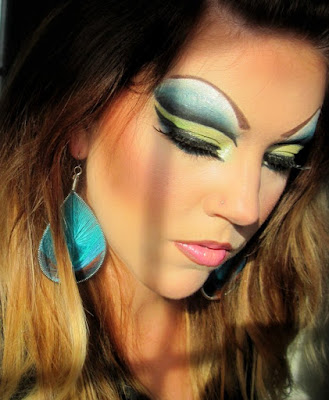 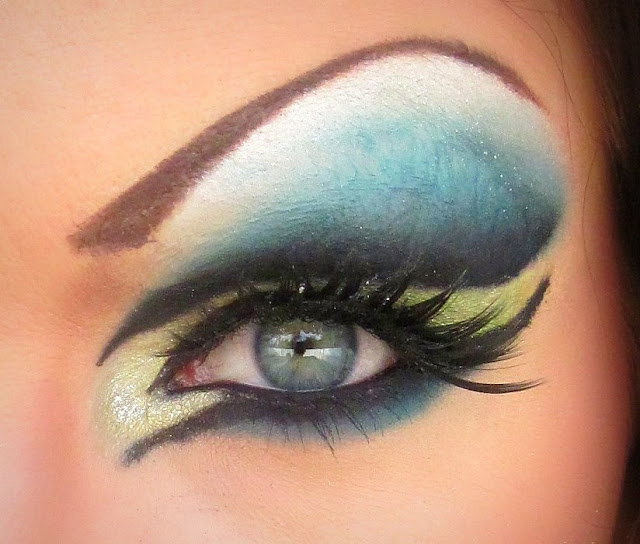 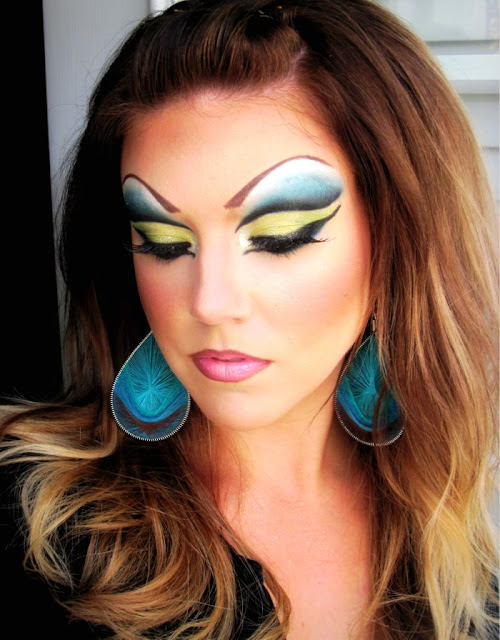 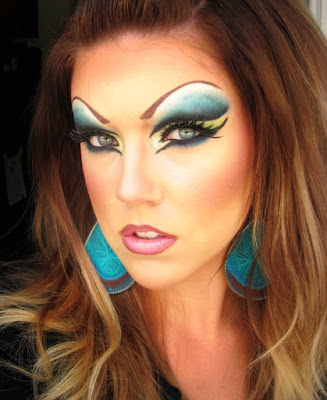 I had sooo much fun doing this!  For real, this was the most fun I've ever had doing makeup.  I know you can't really see the sparkles (any advice on how to get glitter to show up on camera???) but I swear they're there.  I used Petrilude's video (the glue stick method) to help me cover my brows.  It worked pretty well.  You could still kinda see where my brows were, even after foundation, concealer, and powder, but with the eyeshadow on it really doesn't matter.  Oh, just f.y.i, shadow doesn't like to apply as nicely on glue as it does on skin.

Then to draw on my new brows I used the brown ELF studio cream liner ($3 at Target) and it worked PERFECTLY!  I was worried about them not looking right but I think they look great!
What I used:
Too Faced Shadow Insurance
88 palette (dark turquoise blue)
NYX "Black" eyeshadow
Inglot shadows 371 M (bright blue), 352 M (skintone color)
NYX JEP "Milk" right under new brow and all over lid
NYX silver liner
NYX ultra pearl manias "Lime" and "Yellow"
Jesse's Girl sparkly white/gold pigment
Bed Head White Eyeshadow under brow
Bobbi Brown "Black Ink" gel liner
MAC "Blacktrack" fluidline
Kat Von D lashes from the Tattoo Chronicles Palette
L'oreal Voluminous Carbon Black
Face:
ELF blush/bronzer duo
NYX "Taupe" blush to contour
A random no name pink blush I have
Inglot 351 M to highlight under eyes
Same Jesse's Girl pigment to highlight cheeks and add sparkle
Lips:
A brown eyeliner
MAC "Pink Friday" lipstick
MAC "Right Image" cremesheen glass
And then I teased my hair like crazy, which is not my thing at all haha.
This was so much fun to do!  For real, if you ever have a chance to rock some drag makeup, do it!  Ashii had suggested that I do a drag look like forever ago and I've wanted to I just didn't have anywhere to wear it haha.  So trick-or-treating here I come!  I hope you guys all have fun and stay safe!!!  Take pictures and show me what you're being!!!
Posted by Starryskies214 at 4:33 PM