I've heard a little bit about these Maybelline Color Tattoo 24 Hour Eyeshadows (and I'm sure you have too haha) but I was curious about them and wanted to see how they worked.  I have previously not had great luck with drugstore cream shadow products.  You know those Revlon Illuminance Cream shadows (they come in a black container with 4 colors)? I bought some of those and they are HORRIBLE!  They crease soooo fast.  And that's with a primer underneath and a shadow on top.  Do not waste your money on them.

I mean, I love my NYX Jumbo Eye Pencils for the most part and I use the color "milk" almost every single day.  I just feel like my colors show up so much better when I use a base.  And recently I was introduced to a MAC paintpot.  I stinkin love that thing.  Unfortunately, I decided on a color that isn't one that I can use a lot (the color "Delft", it's a gorgeous teal color) so I use it when it's appropriate but that's not very often.

So when I had been hearing things about these Maybelline Color Tattoos and then I saw them at WalMart the other night, I figured I should grab a couple and see what I thought.  There are quite a few colors out there and they were something like $5.84 (WalMart and their weird prices) apiece.  As I already own a teal base, I figured I should pass on those.  As I don't think I would ever use a frosty white base, I thought I should pass on that, and there were a couple other shimmery gold/bronze colors that I didn't think I'd use very often.

So here are the colors I decided on! 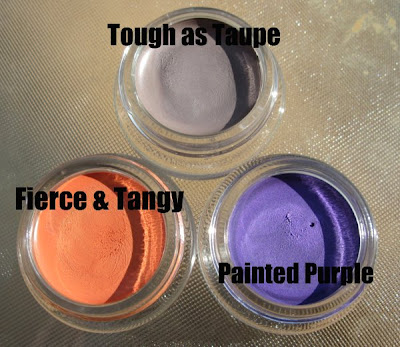 First, I chose Painted Purple because, well, I love purple. 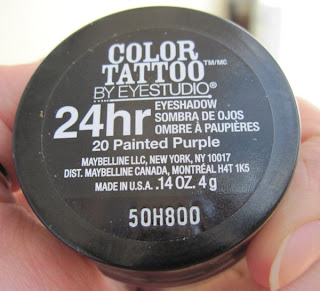 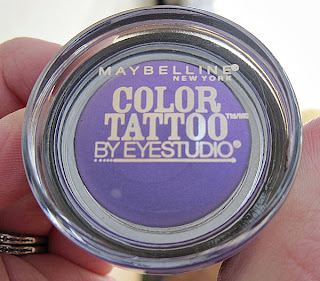 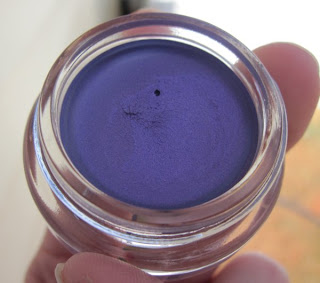 This one was pretty disappointing.  It's not got a nice texture the other two do.  It's kinda shimmery.  And to get it to apply evenly, you need a really thin layer, at which point you're kind of just left with a purple tint.  I may end up returning this one as I just don't really think I'll use it very often.
Then I chose Tough as Taupe 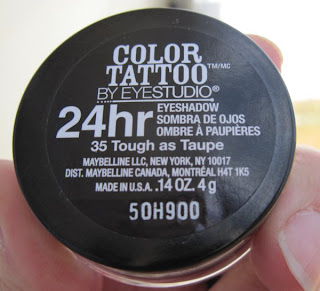 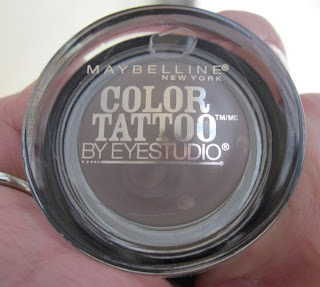 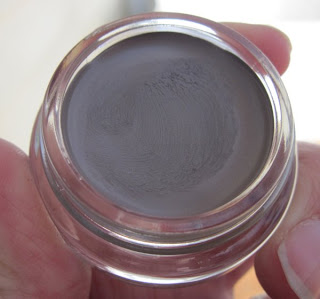 This one is a completely different story.  This one is my favorite.  The texture feels exactly like my MAC paintpot.  It's a matte finish and it's perfect.  I think this one would work AMAZINGLY in conjunction with the Naked 2 palette from what I've seen of the colors in that palette.
And then I was very intrigued by Fierce & Tangy 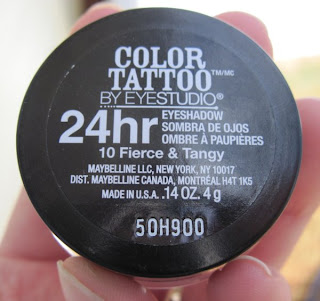 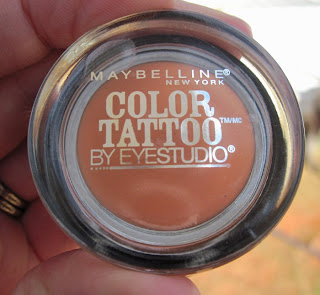 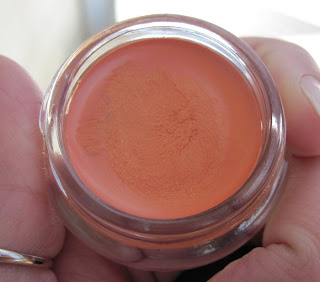 I saw it and thought, "do I really need an orange base?"  Well, no, I don't.  But I've never seen a color quite like this.  In the container it looks almost coral but it's definitely orange.  It has a very slight shimmer to it.  The texture is almost the same as Tough as Taupe, but not quite as thick.  The color reminds me so much of the Dior runway show makeup from Spring/Summer 2011 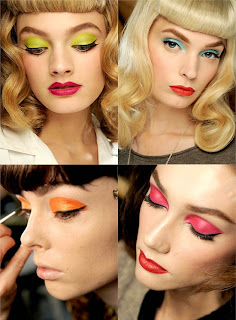 Here are the swatches, I wanted to show them how I would use them too.  I don't think I'd use them as a shadow, I think I'd use them as a base so I wanted to show how they effected certain shadows that I could think of that I would use with them.  So in these pictures there is a swatch of the Color Tattoo alone, a shadow alone and below that, a swatch of the shadow over the Color Tattoo, if that makes sense: 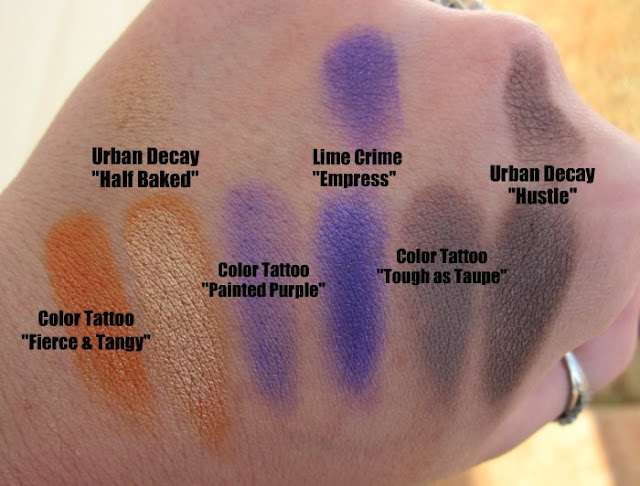 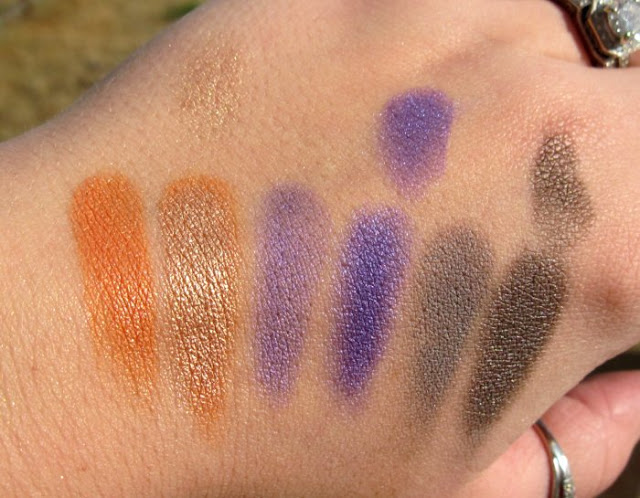 And now my look!  I used the Fierce & Tangy as a base and used my Naked palette for this look: 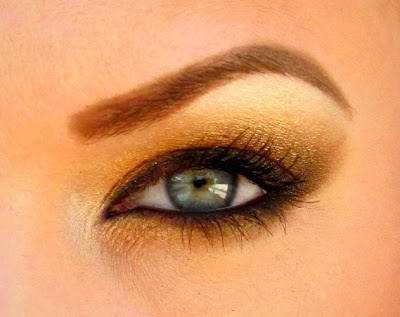 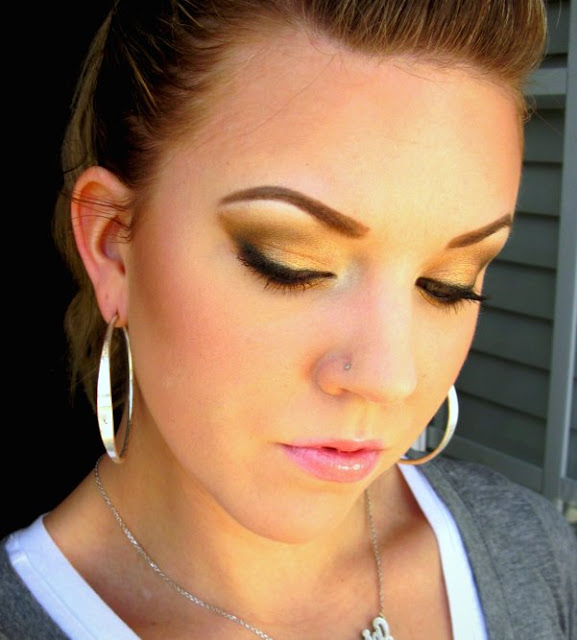 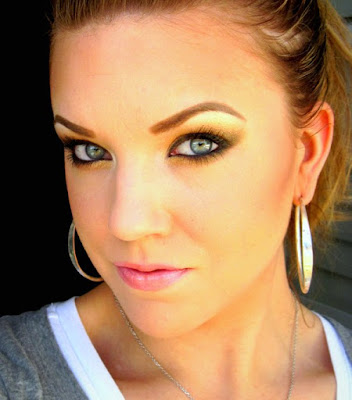 I have done this look before, same exact color placement, just no orange base: 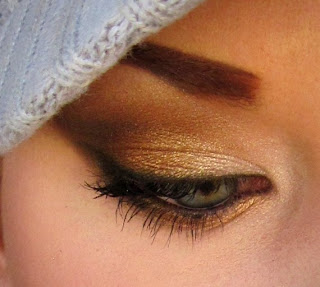 As you can see, the orange base definitely made this look much warmer and more vibrant! 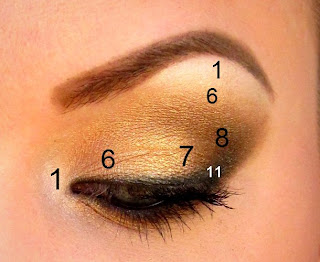 So overall, I'd definitely recommend the orange and taupe colors.  I'll have to give the purple one another chance but I'm thinking that one's a no go.  I mean, these are less than $6 at WalMart (probably like $8 or $9 at the drugstore) and I absolutely think they're worth that.  I LOVE using bases as they can alter the color of shadows and make you get almost more than one color from one shadow.
Do you have any of these Color Tattoo shadows yet?  What do you think of them??
I hope this helps someone out!  Let me know what you think!
Posted by Starryskies214 at 3:24 PM